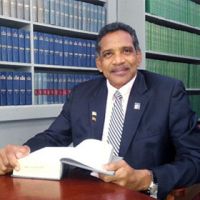 Mr. Bristol joined the firm of Henry, Henry & Bristol in 1990 and has practised since then in Grenada. Mr Bristol has worked extensively in St Lucia as counsel and qualified as a mediator through the Centre for Dispute Resolution in England.

Mr. Bristol is a former aircraft engineer and served as the Chairman of the Air Transport Licensing Board in Grenada as well as on the Board of the Airport Authority and its subsidiary ground-handling company.

Jimmy, as he is better known, is keen on sailing and was the chairman of the Grenada Sailing Festival for over fifteen (15) years since its inception in 1994. He is also a national yacht racing judge and has judged regattas in Grenada, St.Vincent & the Grenadians (the Bequia Easter Regatta) and St.Thomas US Virgin islands (the Rolex Regatta).

Practice Areas: Mr Bristol practises mainly in the areas of commercial law, including banking, corporate law and civil litigation taking cases up to the Grenada’s final court of appeal, the Privy Council in London.

Qualifications: Mr. James Bristol received his legal education in England and was called to the bar of England & Wales in 1989 and was appointed as one of Her Majesty's Counsel on the 1st of Febuary 2021.

As a way of giving back to the profession, Mr. Bristol has been honoured to act as a Judge of the Eastern Caribbean Supreme Court.

Email address: This email address is being protected from spambots. You need JavaScript enabled to view it.

History of the firm

The founding partner, Mr. Ferdinand M. Henry, was called to the Bar in England just after World War 1 and the second partner, Sir Denis Henry Q.C. was called to the Bar in 1939. The firm of Henry, Henry & Bristol was formed in 1959 and the three partners were Mr. F. M. Henry, Sir Denis Henry Q.C. and Mr. Carol W. J. Bristol Q. C. The current principal is Mr. James A.L Bristol.